Climb 219 steps to the top for breathtaking views of the nation's oldest city and the Atlantic Ocean. 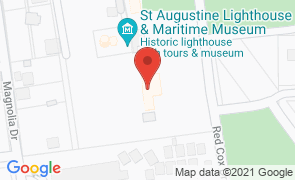