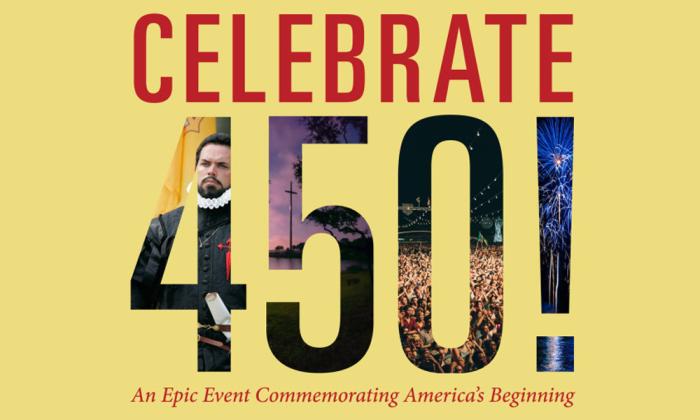 2015 is the year St. Augustine, Florida, commemorates its 450th birthday. Commemorative events are planned throughout the year, culminating in a birthday bash over the Labor Day weekend that will include fireworks, street parties, art exhibits, historical re-enactments, concerts and much more.

St. Augustine was founded on September 8, 1565, when Pedro Menendez de Aviles landed and claimed what would become the nation’s oldest city for Spain. The settlement he founded was an amazing mix of Spaniards, Africans (both free and enslaved) and the Timucuans who were native to the area. Clergy, tradesmen, craftsmen, soldiers, women and children comprised this community (America’s original melting pot!).

Four hundred and fifty years later, the multicultural origins of St. Augustine are still evident everywhere – in the historic houses and government buildings, through the narrow streets that were built to funnel in the breeze off the ocean, at the city’s central Plaza de la Constitucion, where memorials to the foot soldiers in the struggle for civil rights in the 20th century stand side by side with a statue of Ponce de Leon, and all along the bayfront leading to the iconic Bridge of Lions.

The festivities will take place city-wide throughout the weekend, with street festivals, fireworks, live entertainment, re-enactments and commemorative ceremonies.

The music and street festival will take place on Friday, Saturday and Sunday, and will include historical and cultural performances as well as several well-known and highly sought-after musical performers on multiple downtown stages. Emmylou Harris and Rodney Crowell, Aaron Neville, JJ Grey & Mofro, Mavis Staples, and Justin Townes Earle will be the headliners for the three days of the music and street festival.

On Saturday, September 5, a spectacular fireworks show over the Matanzas River will light up the town. And on Sunday evening, St. Augustine’s EMMA Concert Association will present Fiesta 450, a Spanish music and dance performance, at the St. Augustine Amphitheatre beginning at 4 p.m.

A Cake Cutting & Proclamation Reading will be held in the Gazebo at the Plaza de la Constitucion on Monday, September 7.

Founder’s Day on Tuesday, September 8, 2015, will be full of activity, beginning with  the Countdown Clock Ceremony at the Visitors Information Center at 7:45 a.m. The re-enactment of Pedro Menendez’s landing will take place at the Mission Nombre de Dios, followed by the Procession to the Cathedral Basilica of St. Augustine, and the Commemorative Mass at the Cathedral Basilica. The mass will be attended by dozens of Catholic bishops from Europe and the Americas, including Cuba and the Vatican, as well as the King and Queen of Spain, honoring the arrival of Christianity in the New World and the establishment of America’s first parish.

Arts, music, food, fireworks, living history, and a city-wide party atmosphere will all combine with the historical significance of the date to commemorate and celebrate the founding of St. Augustine 450 years ago this September.