Salt and Pine brings vocal harmonies and “songs from the heart” to St. Augustine.

St. Augustine welcomes a new musical group, Salt and Pine, which was recently named the Best New Artist at the 2018 Narrow Music Awards. Now a group of four (Nolan Baker on guitar and vocals, Haley Thompson on percussion, vocals and piano, Matthew Kirkland on banjo and mandolin, and Sam Chen on the cello), they bring together what they call “songs from the heart.”

According to Salt & Pine's Reverbnation page, “The band was born in St. Augustine as a result of like-minded musical humans coming together over a shared love of acoustic music.” Salt and Pine is influenced by The Beatles, John Prine, and John Lennon, as well as ’90s alternative, folk revival, and bluegrass.

Nolan can sometimes be heard playing solo, but he embraces the influence of his group, with the vocal harmonies and the fun of making acoustic music together. Nolan says, “I want to make it a mission if I can, with music, to translate love … love your neighbor, love yourself, love who you are with; that’s a recurring theme in a lot of our songs”.

“It really is an honor to share this town as a musician, with everyone here. And everybody is kind of excited for everybody, so that is the most important thing.”

"The Blame Game" by TJ Brown

Lonesome Bert and the Skinny Lizards 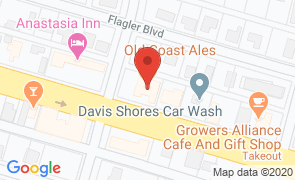 Salt and Pine - Next Showing