Historic re-enactors bring the 1740 battle of Fort Mose to life during an all-day event that includes demonstrations and children's activities. 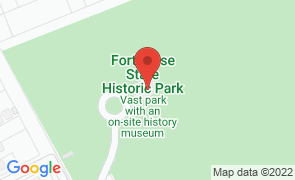