The City of St. Augustine holds a community gathering to remember those who died in the terrorist attacks on September 11, 2001. 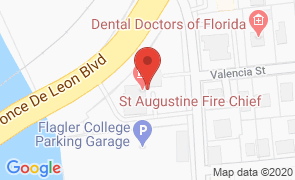