Host a wedding ceremony or reception at this historic venue located in the middle of historic downtown St. Augustine. 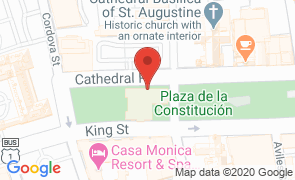