Explore St. Augustine's first legal distillery since Prohibition and sample some of the award-winning spirits being crafted there. 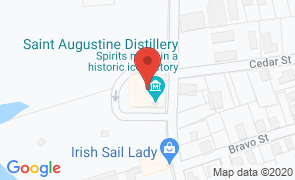