"The Mayor of Candor Lied"
"Sunshine"

Originally from New Jersey, and from Dayton Ohio for 20 years, Smokin Joe Schauer has been a St. Augustine landmark musician for nearly 10 years. A fiery beast of a guitarist and a smooth as butter mandolin player, Joe is known around St. Augustine as “Smokin Joe” for good reason. His daring ability to dance outside the lines of music makes Joe a spectacle to observe as an audience member. He is not bound to any form when it comes to his original material, and this also makes him a highly efficient improvisational mandolin and guitar player.

Joe shines like a Florida summer day at noon when he steps up to the stage, always eager and ready to push the boundaries of what audiences expect. Joe is heavily influenced by Harry Chapin, John Prine, Dave Matthews, the Moody Blues, Black Sabbath, and the epically famous Grateful Dead. Featured on St. Augustine’s Local Honey record, a collaboration of St. Augustine’s top songwriters, Joe has always also had a love for the original folk song.

Smokin’Joe is an avid cheerleader for all things original and that seeps into every aspect of his glorious personality as well. He is host of St. Augustine’s longest running open mic night still in progress at Ann O’ Malley’s Deli & Pub every Tuesday evening starting at 8 p.m.  Joe also plays with Not Quite Dead, and User Illusion.

"Ain't No Sunshine," performed by Christian Powers, and written by Bill Withers.

"Ain't no rest for the wicked"

"Volcano" by Jimmy Buffet, performed by Committee Lite AKA Brewer and Miller. 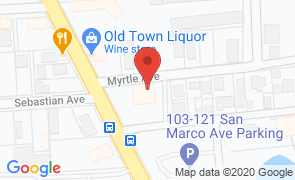