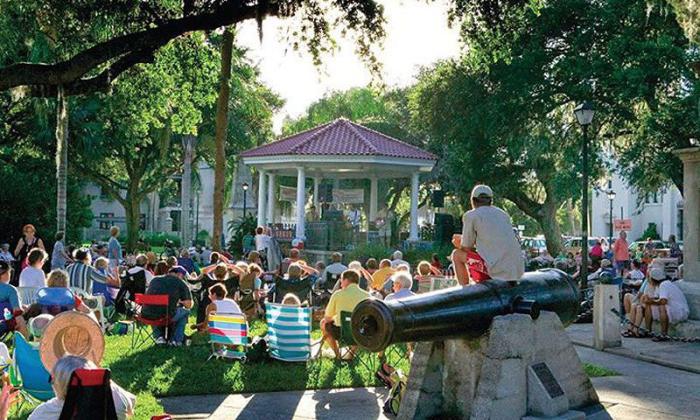 St. Augustine’s Sing Out Loud Music Festival, sponsored this year by the  St. Augustine Distillery, is the largest free music festival in Florida. The Festival returns in September 2021 with a roster of more than 100 national, regional, and local artists performing in live concerts over three weekends at multiple venues downtown and at the St. Augustine Amphitheatre. This is the 5th Annual Sing Out Loud Festival, and it promises to be one of the most exciting and eclectic presentations of musical performances and one of the most significant festivals in northeast Florida.

Headline acts include the rock band Mayday Parade from Tallahasse on September 11, British singer/songwriter, Yola on September 12, New York rock band, Parquet Courts (performing with Dehd from Chicago and Flip from Gainesville) on September 18, and TLC's Celebration of Crazy Sexy Cool with Bone Thug-n-Harmony on September 25. Tickets for these performances will go on sale on Friday June, 25, 2021 at the Amphitheatre Box Office and online. A portion of the proceeds will go to a selection of local charities.

Most of the performances are free, including American bluegrass singer and composer, Dan Tyminski on September 11, and the St. Augustine Record Fair, presented by ToneVendor Records, featuring rock band Bears and Lions on September 26. That's just for starters — 100 more acts will be announced as the date of the festival approaches.

Nothing for "Sing Out Loud" was found.