The Sons of Israel Congregation moved into their new synagogue in 1924. 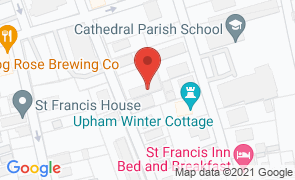 The Well at The Collector
0.1 miles away