A Haunting Tour of the Lighthouse

The St. Augustine Lighthouse has been visited by SyFy's Ghost Hunters team various times - here's why!

The Dark of the Moon Tour at the St. Augustine Lighthouse and Museum is fun whether you believe in ghosts or not. The history of the first official light station of America is colorful enough to chill even the most stoic of visitors.

Throughout the currently active lighthouse's 139 years of functioning, many an incident has occurred. As with all historic places, the lighthouse has stories of many people, including the light keepers and their families. Whether or not their stories have ended up as ghost stories is up to you to decide on the Dark of the Moon Tour!

Visitors arrive first at the gift shop where every guest receives a glow stick necklace to light their way through the lighthouse grounds at night.

Electromagnetic field (EMF) meters are available for guests to rent. These detect energy fields, i.e. ghosts. Everyone is told to turn off their cell phones or put them on airplane mode as receiving any phone calls or texts on the tour can mess with the meter's signal. We are also encouraged to take pictures and videos throughout the entire tour.

(Important thing to remember about the Dark of the Moon Tour - It is the ONLY tour in St. Augustine that actually gets you into the lighthouse, grounds, and keeper's house at night.)

Do you think the St. Augustine Lighthouse stairs are haunted?

The guided tour begins at the light keeper's house, where we hear the stories of the previous lightkeepers and their families. The guide tells the story of Hezekiah Pittee, who oversaw the reconstruction of today's lighthouse in 1871. Supplies were brought to the construction site from the inlet via rail carts, and Mr. Pittee's children and one of the worker's children decided to play in them. Two of Mr. Pittee's children died in the accident as did the worker's child.

(As we're exiting this room the EMF meter in my hand lights up red, which is supposed to signify a spirit. When the light returns to green, it means there isn't any energy around you.)

Next, we make our way to the ground level of the keeper's house. The tour guide tells a spooky story about a tour he gave. He says that originally the keeper's house was split into two; one side for the keeper and his family and the other side for the assistant keeper and his family. There was once a staircase in the hallway, and where it used to stand, he found the dirty footprints of a child one night. He noted that there were no children on the tour that evening, and certainly none walking barefoot.

The group shuffles down a spiral staircase to get to the basement level of the keeper's house. The guide tells the story of keeper Pierre Rasmussen or Pete, who worked at the St. Augustine lighthouse for many years and whose wife died at the lighthouse. Even though he passed away elsewhere, the spirit of Pete is still felt on the lighthouse grounds, where they say he is looking for his wife.

The next part of the tour is free time. Each guest is allowed the chance to climb the 219 steps up to the top of the lighthouse to catch the view during this time as well. Most of the group, at least those who have not been on the tour before, do so. (Speaking with one couple, I learn they are on their tenth Dark of the Moon tour! They say they have experienced the paranormal on this tour and come back to experience it again). The climb is doable for most and there are several landings in between the trek up to stop and catch your breath.

The top of the lighthouse is spectacular! The entire town of St. Augustine is laid out before you. The lighthouse beam stretches out 27 miles; illuminating every part of the nation's oldest city. Walking back down the lighthouse is spooky and certainly felt like an older, historic building, with possible spirits floating around.

With free time many of the visitors explore the keeper's house on their own and the surrounding grounds of the lighthouse. The guides explain some of their own experiences with ghost sightings, and say that now after working at the St. Augustine Lighthouse they all believe in ghosts!

The spiral staircase in the Lighthouse Museum.

The Dark of the Moon tour is very straightforward; the guides share the factual history of the lighthouse and their own paranormal experiences. They boast that this tour is all ghosts and no gimmicks, meaning that the hauntings are authentic. Just ask Ghost Hunters, the Sci-Fi Channel show that featured the lighthouse in two episodes! Admission to the tour is $25.00 for Adults and $20.00 for kids younger than 12.

The tour can last up to two and a half hours, but fear not! They sell bottled water and snacks during the tour, and there is a restroom onsite. Catch sight or hear the sounds of a person long ago passed that still roams the lighthouse grounds searching for something or someone on this unique tour in St. Augustine. 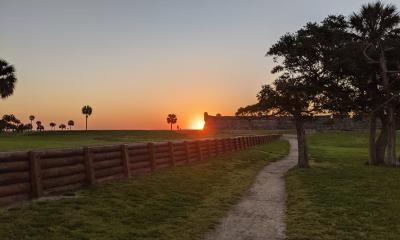 10 Reasons to Move to St. Augustine 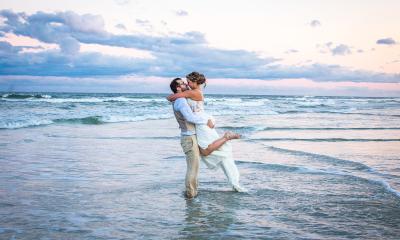 A Beach Wedding in St. Augustine 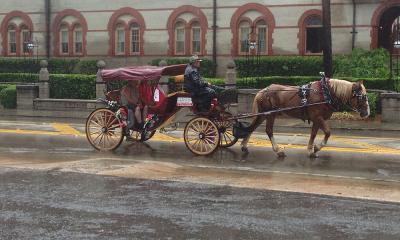 How to Fight the Rain in St. Augustine and Win 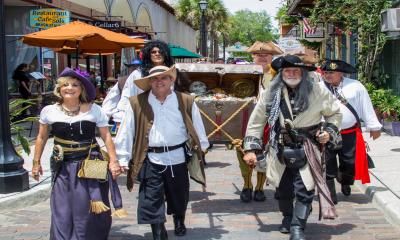