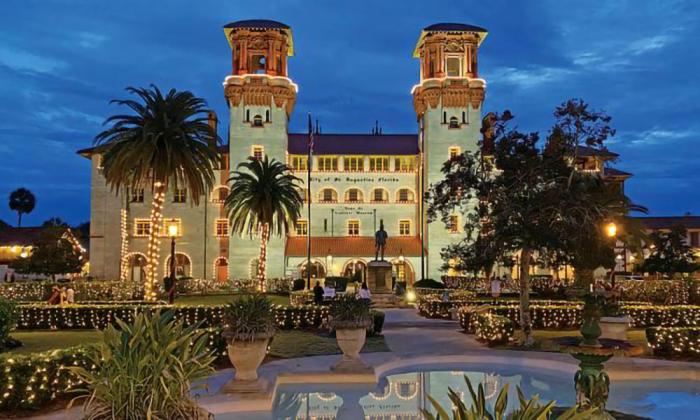 During the Christmas holidays, the city of St. Augustine lights up and becomes a festival of twinkling white lights as it hosts its annual Nights of Lights holiday display. Visitors and long-time residents alike are treated to a wonderland of lights adorning the ancient city, beginning at the Plaza de la Constitución, with its stunning holiday tree in the center and oaks strung with lights, and stretching out to illuminate all of St. Augustine's historic district. From roof shingle to doorway entrance, the downtown buildings take on a glow of holiday cheer, with millions of twinkling white lights covering the historic sites, bed and breakfasts, museums, restaurants and shops of the nation's oldest city.

St. Augustine's Nights of Lights celebrates its 28th anniversary this year. The festival traces its origin to the Spanish tradition of displaying a white candle in the window during the Christmas holidays. In 2021-22, the tradition continues, with some three million white lights twinkling on the wonderful old buildings and landmarks along the bayfront and throughout the city's brick-lined streets. The lights will be up from Saturday, November 20, 2021, to Sunday, January 30, 2022.

Nights of Lights has become famous around the world as one of the finest places to see holiday lights. The festival has been featured on top ten lists in publications like National Geographic and Rachael Ray magazines.

Get some helpful tips and tricks to help you navigate St. Augustine's Nights of Lights.Read More

Experience the Regatta of Lights on the Water

Celebrate the holiday season by enjoying St. Augustine's Regatta of Lights from the water.Read More

7 Ways to See Nights of Lights

Nights of Lights in St. Augustine has been a favorite event for thousands of people every year. Check out this blog to understand why!Read More

Nothing for "Nights of Lights" was found.