The Most Delightful Anglophile Itinerary

Looking for a proper British experience without going through customs at Heathrow? St. Augustine, Florida is a quaint and classy getaway this side of the pond.

Whether it's the intelligence, the wit, the teacups or the delectable accent, if something about the British just tickles your fancy, then I apologize in advance for tempting you with this incredible itinerary for Anglophiles right here in St. Augustine, Florida. If you haven't quite figured it out, an Anglophile is a person with a passion for British culture, heritage, history, and everything else that comes with it, with a special emphasis on England. Here in St. Augustine you will find a brilliant destination this side of the pond for experiencing all the things you love about the English. St. Augustine has a fascinating history linked with Britain, having been an English colony from 1763 to 1783, and even having been attacked by Queen Elizabeth I's own personal privateer, Sir Francis Drake, in 1586.

Though St. Augustine may have cornered the market on British history, the whole state of Florida is a favorite destination for Brits. Who knows the reason why. It couldn't possibly be the weather or the beach or the theme parks (right?). And you know how it goes when visitors come to St. Augustine—visits become long holidays, long holidays become indefinite leave to remain, and next thing you know, Ann O'Malley's is filled with a bunch of strangers with accents watching a Liverpool match at an indecent hour. Who can blame them? But as a result of these vacationers-turned-staycationers, their influence has left its mark all around town and forever contributed to our local flavour (See what I did there?).

So if you're waiting for Mr. Darcy, if you have a borderline obsession with the English monarchy, if you camped outside the box office to buy tickets to see Susan Boyle, or if you've gone all hooligan at a high school football game (as most mothers often do) or if you're "Posh with a capital P" and you know it, St. Augustine has plenty to feed your inner Anglophile.

Just north of town visitors will do a double take when they see a double decker British bus and the pub it sits next to. It marks the spot of the King's Head Pub, a Tudor-style building that houses an authentic pub serving British brews and English fare. The bus outside is totally real as well, having been transported across the ocean at some point just for our Instagram-worthy pleasure.

The inside of the pub will transport you to England with country and team flags thrown about the room, a warm wooden interior, and all the nice cozy clutter to make you feel right at hearth and home seated with a pint of Guinness and a basket of fish and chips. They have all the fare an Anglophile can long for, even the obscure items such as Scotch eggs, Cornish pasties, sausage rolls, and yes! Sticky Toffee Pudding a.k.a. "The Best Dessert" that I can't believe I failed to mention. For anyone who's been in a British pub, being at the King's Head is truly indistinguishable from the taverns in the UK. Be prepared to put vinegar (instead of ketchup) on your chips (instead of fries)!

The Chatsworth Pub located in the Historic District is another overwhelming display of British elegance. Their tea room is decorated with fine furniture and cozy pillows in authentic English style. Their afternoon tea is a nice option, but grab a partner because this party is for parties of two or more. It's available every day of the week from 12 p.m. to 5 p.m. -- it requires reservations so make sure to book 24 hours in advance.

Different tea settings are available depending on the group size and occasion. All feature a pot of tea, classic savory bites such as cucumber sandwiches and chicken salad sandwiches, fresh scones (pronounced 'scons') with Devonshire cream and jam, and yummy baked goods such as macaroons, pastries, mini cheese cakes, or brownies. The best part is that the choices are yours and the contents of the tiers are customizable. For $5 per person you can also add a glass of champagne into the mix.

If you haven't gotten your fill of tea yet or perhaps you're so enthralled with tea culture that you want to take it home and host your own fancy tea parties, then pop into the Spice and Tea Exchange and browse their astonishing array of tea blends. You'll be the envy of the queen with options such as Berry Bouquet (pronounced Buck-et), Custard Tart Herbal Tea, Earl Grey Creme Tea, Jasmine Pearls Tea, and Mint-Chilla Chai-Nilla Tea. They also have all the accessories for making a nice cuppa including kettles, tea cups, cotton bags, infusers, and more.

If you're looking for a very British bed and breakfast, then check out the Kenwood Inn. With room names like the Wellington Room, Olde English Room, Country Victorian Room and British Colonial Room, it'll be just like having to stay over at Mr. Bingley's to tend to your ill sister (minus all the handsome men in period garb being awkward and romantic).

If the Kenwood Inn doesn't suit you, then perhaps the Victorian Inn that shares its namesake with the famous British monarch will do. Or even the St. George Inn, named after the street dedicated to the patron saint of England and the king at the time of St. Augustine's establishment as a British colony who shared his name, King George III. If those are all booked up, then really, any of the bed and breakfasts in St. Augustine look like something out of an episode of Escape to the Country, with beautifully decorated interiors and timeless architecture.

Shop Ever So Lovely Linens

This linen shop is operated by an actual British native. She's from Derby, she's lovely, and the linens from her shop come straight from the motherland. You might be wondering "What's so great about linen? Why should I care about this?" Well, if you're an Anglophile, you probably already know, but for the rest of you, linen was an important product of the Industrial Revolution and England was well-known for their textiles. It's why lots of frilly bits and bobs always paint a picture of English decor. You'll find plenty of these sorts of things in the Linen Room located in the Lightner Museum courtyard.

These former English barristers give private tours around St. Augustine. Tour attendees are seated in a small open-air golf cart bus that's equipped to take you through the narrow streets that other tours can't maneuver. All the while, you have Peter and Maureen Gold, London natives, tell you about the city's history, including its English history, and answer your questions. They also share their own stories and anecdotes. Having done tours for several years, they are well-read on the city's past and always interested in learning more about it.

Karaoke with Your Mates

No trip across the pond would be complete without karaoke, and no trip across the Bridge of Lions either. Karaoke might be the most British thing about the British Pub, and it's certainly worth the trip. You can catch it every night of the week and enjoy some great British brews along with it. The British Pub has more than 70 beers to choose from, and their karaoke song list is being updated every day. But as you can see from this list, they already have some classics: The Spice Girls, The Proclaimers, David Bowie, The Beatles, Annie Lennox, George Michael, Kylie Minogue and all your favorites from the British Isles.

The British Invasion in the 1960s brought over some of the most beloved rock musicians, changing the face of American music forever: The Beatles, The Rolling Stones, The Kinks. If you love Beatlemania and consider yourself a member of Sergeant Pepper's Lonely Hearts Club Band, then Mod Mari is the place you want to go. Mod Mari also loves all things English and it shows in the assortment of accessories available including mugs, bags, and fun retro lunchboxes.

Hate to disappoint you, but, there aren't many. I think most of the moments of British History that we have are pretty sad because they involve a lot of warfare and disappointment. Remember the Boston Tea Party? My goodness, what a mess that was. Don't even get me started on Benedict Arnold.

But what a blessing to have any British history at all in Florida, especially right here in St. Augustine. So what are our great moments in British history?

Well for one, we're one of the places that Sir France Drake himself, Queen Elizabeth's renowned right-hand privateer, burned and pulverized to pieces. Yes, Sir Francis Drake, also known as El Dracque and Draco (The Dragon) in a totally Slytherin move attacked St. Augustine and pillaged the crud out of this town. He's part of the reason Spain got serious about building that Castillo that still stands today. And to commemorate Sir Francis Drake coming in and blasting us to bits, we have Drake's Raid every year, typically the first Saturday of June. The event is a historical reenactment recalling the English attacking the Spanish.

The Change of Flags Ceremony

You've heard us say this before, that St. Augustine is a town so nice the Spanish ruled us twice. Well, in between those Spanish periods, you had a period of time where the English called the town their home away from home. This happened when the Spanish ceded Florida to England as part of the Treaty of Paris concluding the Seven Years War. This event is marked each year by a ceremony at the Castillo de San Marcos. The ceremony has all the pomp and circumstance that makes people go nuts when there's a royal wedding -- it typically happens in the spring.

Although they may seem to be two separate things, English history is Celtic history. After all, the Celts lived throughout the UK and unequivocally affected the culture. Celts also existed in regions in Spain, meaning the Spanish who first settled St. Augustine also had some Celtic heritage. To honor the Celtic heritage throughout Florida, St. Augustine plays host to the annual Celtic Festival. During the event, multiple vendors set up camp at Francis Field pushing their very Celtic wares including Celtic jewelry, home decor, apparel, and delicious goods. Spectators can also enjoy some stateside Highland Games. Expect lots of British food served such as shepherd's pie and Scotch eggs.

Yes! That's right, you can meet your British heroes face to face--everyone from Florence Nightingale, queen of modern nursing...

..to an actual queen.

Okay, lovlies, I never said the face wouldn't be made out of wax so you really shouldn't have assumed that it wouldn't be. But regardless, Potter's Wax Museum has on display all the extraordinary Brits that we adore.

And, perhaps some of the ones we don't really adore quite as much, *ahem*, but let's be frank, it's hard being a king. Potter's Wax Museum may not be Madame Tussaud's on Baker Street, but it's a worthy local substitute. Many of the figures are even made from the same molds used for Tussaud's.

Well, I hope I've given you a few things to consider when looking for a place to let out your inner Anglophile. You don't always need to break the bank or set aside weeks of vacation time in order to experience a taste of what the world has to offer. Just check out places such as St. Augustine where history and culture meet in a most varied and pleasant manner. 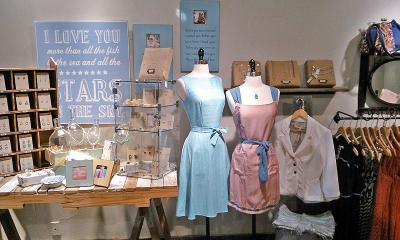 Boutique Shopping For Every Style 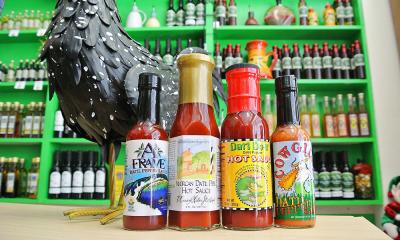 What the Heck is a Datil Pepper? 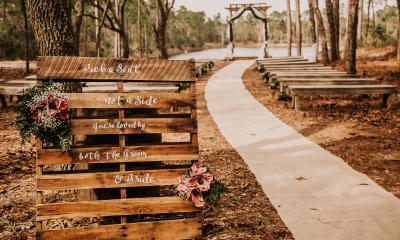 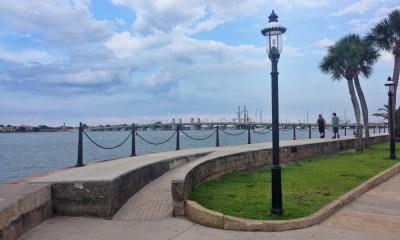